NORTH LAWNDALE — Beauty supply stores that specialize in selling hair are staples in Chicago’s Black communities. But until recently, none of the shops in North Lawndale were Black-owned.

West Side native Vetress Boyce changed that when she opened Boyce Enterprise Beauty Supply late last year at 3722 W. 16th St. Like other Black entrepreneurs, she had to overcome gatekeeping and discrimination to break into the ultra-competitive hair industry, where supply is dominated by Korean companies.

“It’s very similar to real estate, where there’s redlining and blockbusting,” Boyce said. “If these companies won’t give African American businesses access to a product that we’re the No. 1 consumers of, it’s a problem. It’s a serious problem.”

Natural and synthetic hair — which can be used for braids, sew-ins, extensions, weaves and wigs — is the moneymaker at beauty supply stores. Customers seek quality brands like Outre, Model Model, Sensationnel and Shake-n-Go — and beauty supply shops must stock them if they want to have a successful business, Boyce said.

“If they come to your store and you don’t have those brands, they go somewhere else,” Boyce said.

But Black business owners often have a hard time buying directly from Korean and Korean-American-owned hair suppliers, which have cornered the Black beauty market for decades, Ennon said.

In North Lawndale, there are five beauty supply shops. Boyce’s is the only Black-owned shop, said Rodney Brown, executive director of the North Lawndale Chamber of Commerce. Another shop that recently opened up, Beauty Hair World at 3942 W. Cermak Road, is run but not owned by a Black woman, operator Christina Vaughn confirmed.

Boyce, who ran for alderperson in 2015, has years of business experience. She owns a general contracting business, is a real estate agent and opened a successful medical supply business in North Lawndale.

But when Boyce went to open a beauty supply shop, she was essentially boxed out by wholesalers, she said. They gave her higher prices than the industry standard, required massive minimum purchases or refused to sell to her, she said.

Boyce attempted to open direct accounts with distributors to stock her store. Her applications went unanswered or were “denied for no apparent reason,” she said.

“I get emails saying this supplier isn’t doing business in my area. But I know of other businesses owned by different ethnicities that are stocking those products,” Boyce said.

Beauty supply stores that can’t buy directly from manufacturers and distributors have to buy goods that are already marked up by a middleman, Boyce said.

“If I have to buy from a middleman … I have to mark it up more than other stores that have access to those accounts. That’s something small businesses struggle with consistently,” Boyce said.

Without hair from a manufacturer, distributor or price-raising middleman, Boyce was stuck.

Boyce’s experience breaking into the hair supply industry is one felt by many Black entrepreneurs. Gatekeeping has been a standard in the industry for at least 40 years, said Ennon, founder of the Black Owned Beauty Supply Association, which helps Black-owned shops access distributors.

In the ’70s, much of the market was captured by Jinny Beauty, a Korean-owned business that started with dozens of stores in Black neighborhoods, Ennon said. The company grew to dominate the industry and is the biggest distributor of Black and multicultural beauty products worldwide.

Since most beauty supply stores relied on Jinny Beauty as a distributor, entrepreneurs like Ennon who manufactured hair products couldn’t get their goods on the shelves without selling through Jinny. That tight grip on the supply chain makes it easy for Jinny Beauty and other large distributors to protect retailers they have longstanding relationships with from competition from Black entrepreneurs trying to break into beauty supply and product-making businesses.

“You’d have to sell it to [Jinny] to get it into the brick-and-mortar stores,” Ennon said. “And the problem is also getting the products. You open up a beauty supply store, it’s hard to get the main brands.”

Another hurdle for Black business owners is having the cash upfront to stock the store with hair, wigs and products, which can cost upwards of $150,000, Ennon said. While most shops typically buy from distributors on credit, giving them as much as three months to pay for the goods on their shelves, Black entrepreneurs, even those who have been in the business for decades, are often denied credit, he said.

“When a Black beauty supply store opens, they have to pay cash upfront for all these products,” Ennon said.

A representative for Jinny Beauty did not respond to questions.

The lack of Black ownership among beauty supply shops “is something that’s been an issue for many, many years,” said Louis Hoi, a vice president for Sensationnel, a sought-after hair supplier.

When it comes to minimum orders, pricing, accepting accounts and offering credit to stores, distributors should apply the same rules to everybody they do business with regardless of race or connections, Hoi said. Sensationnel takes into account market demand and the density of beauty stores in an area when considering whether to work with a retailer, he said.

“We try to set an example for our competitors,” Hoi said.

Boyce said she joined social media groups to get advice on how best to navigate the supply chain, and she visited Black-owned shops on the South Side, including Solo Beauty Supply at 8158 S. Cottage Grove Ave. in Chatham.

Without the support of other Black businesses, “I don’t think this would have been possible,” Boyce said.

Solo Beauty co-owner Nedra Williams is welcoming to newcomers because she also experienced discrimination in the hair business. She and her sister, Dana Williams, inherited the business from their parents, who “had the usual impediments that still exist today,” Nedra Williams said.

But since their parents entered the business before non-Black companies began dominating the beauty industry, “the structure that keeps Black people out hadn’t been developed yet,” Nedra Williams said.

“They were able to get in under the radar and create some relationships early on that now is really difficult to foster,” she said.

When Williams’ dad died in 2009, many distributors stopped doing business with Solo Beauty, she said. Some eventually reopened their accounts, but some didn’t, she said.

“We had to basically start over again because the vendors and relationships my father had at the time, they took the opportunity to sever that relationship,” Williams said.

Even though Williams has been in the business for decades, it is still “very, very rare” for distributors to give her credit, she said.

“You want to be competitive with other stores, but you can’t get the merchandise because you don’t have access to the capital,” Williams said. “It makes it difficult for us to scale our stores and carry all the products other stores carry.”

The lack of Black store owners is “a problem of generational wealth and Black people not being able to benefit from our own industry,” Williams said. Black ownership within the Black beauty industry is critical because retailers create opportunities to stock skin and hair products made by Black entrepreneurs, Williams said. And as more Black-owned businesses get into the industry, they can work collectively to tear down the barriers that have kept so many out, she said.

“We’ve basically learned how to get around those impediments,” Williams said. “I find that the more Black people that open stores, the less the resistance is with the distributors. They’ve been able to hide or conceal their discrimination because there wasn’t that many of us. The word wasn’t out.”

But things are changing, Hoi said. A majority of Sensationnel’s new accounts in recent years — and especially since the start of the pandemic — have been Black-owned beauty shops, he said.

But the lack of Black ownership “is not something one company can try to fix,” he said.

Barbara Hardy, an Austin resident who shops at Boyce Enterprise Beauty Supply, said her hair is important to her. Being able to shop at a beauty supply owned by a Black woman from the West Side makes her proud, she said.

“To see somebody of color who is actually from your neighborhood excel, it lets you know that you can do this, too,” she said. “We are extremely proud of her.”

Click here to support Block Club with a tax-deductible donation.

Thanks for subscribing to Block Club Chicago, an independent, 501(c)(3), journalist-run newsroom. Every dime we make funds reporting from Chicago’s neighborhoods. Click here to support Block Club with a tax-deductible donation.

Sat Mar 26 , 2022
While designers have dabbled in gaming for years, only now is the collective fashion industry taking its first earnest step into the metaverse. As it sets its fabulous foot into the blockchain-based virtual world of Decentraland for Metaverse Fashion Week, or MVFW, WWD will report on some of the sights […] 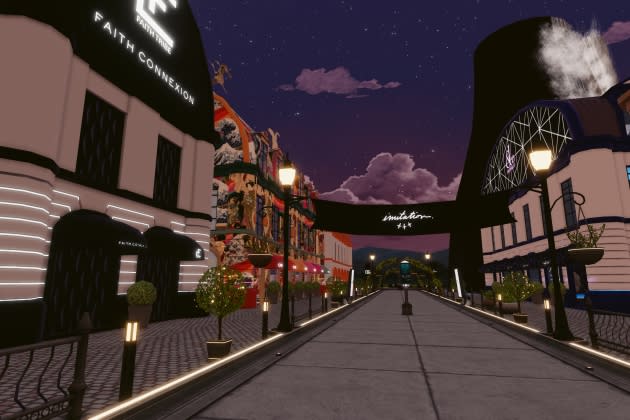