As the cost of living surges, Australia’s longest-serving Treasurer is demanding urgent action to contain the cost of everyday items.

Australia’s longest serving Treasurer, Peter Costello, has chimed in on current cost of living increases, pointing the finger at the Reserve Bank of Australia (RBA).

“If you can contain the bushfire early, you’re not going to need nearly as much resources as if you let it get out of control.”

The RBA aims to maintain an average inflation rate of 2–3 per cent over time, however, some experts are expecting the rate to reach well over five per cent.

Mr Costello said the RBA’s strategy during Covid-19 of maintaining record low interest rates and “essentially printing money” through quantitative easing was appropriate at the height of the pandemic, but was no longer valid.

Raising the interest rate – which Mr Costello expects to see happen before the end of the year – would slow demand for products and services throughout the economy, with the effect of stemming inflation.

“Too much money chasing goods and services, their prices go up. And there’s been a lot of money pushed out in recent years, through [quantitative easing] and low interest rates,” Mr Costello explained.

Mr Costello said the RBA’s stated plan of keeping interest rates low until 2024 was simply not going to happen and that the Central Bank was behind the curve.

“Interest rates will rise before 2024 and people will feel it on their mortgage – and the reason why they will rise is that inflation is taking off,” Mr Costello said.

Mr Costello acknowledged that already Australians were feeling the inflation bite in the form of higher prices for petrol, food transport and other necessities.

The nation is experiencing high volumes of inflation due to the impacts of Covid and the war in Ukraine, meaning the cost of everyday items is going up.

A nurse and single mother has broken down in an emotional TV interview over the current cost of living in Australia, revealing she cannot afford to buy new school clothes for her children.

Perth nurse Julie-Marie Hay revealed to ABC’s 7:30 on Monday that despite working full-time and on weekends, she makes about $1900 after tax.

“My expenses here in this house have actually gone up about $300 a fortnight over the last 12 to 18 months,” Ms Hay said.

“I haven‘t actually bought my children school clothes this year at all. Somehow I have to be able to buy them an entire new winter wardrobe.”

This is compounded by the fact her children also have ADHD and ASD, with Ms Hay recently having to pay $125 for three scripts for them.

Her biggest worry is not being able to afford rent, and her pay has not risen in real terms for four years due to a public service wages freeze in Western Australia.

Ms Hay said there’s no way of getting ahead without a pay rise, admitting she’s “terrified”.

“The Government should be able to give us enough money to be able to survive on. Give us a decent pay rise that actually works in this world today,” she said.

Unfortunately for Ms Hay and many other Australians, Gareth Aird, an economist with the Commonwealth Bank, predicted inflation will outstrip wages growth.

“That means for a lot of workers, they’re going to experience a real pay reduction.”

Doctor Angela Jackson, an economist with Impact Economics, also said how high inflation will go depends on how long the crisis in Ukraine impacts petrol prices.

“I think we should brace ourselves and expect to certainly see inflation above 5 per cent, and probably edging up to 6 per cent,” Dr Jackson told the ABC.

“I think the time for sort of widespread spending without considering the consequences is very much over.”

Sat Mar 26 , 2022
NORTH LAWNDALE — Beauty supply stores that specialize in selling hair are staples in Chicago’s Black communities. But until recently, none of the shops in North Lawndale were Black-owned. West Side native Vetress Boyce changed that when she opened Boyce Enterprise Beauty Supply late last year at 3722 W. 16th […] 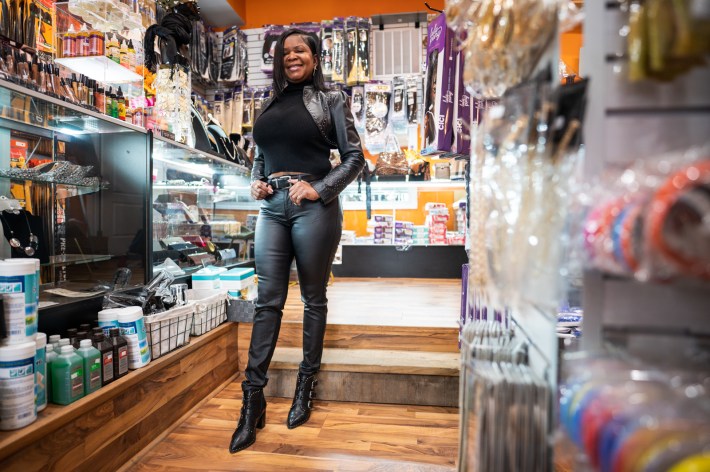