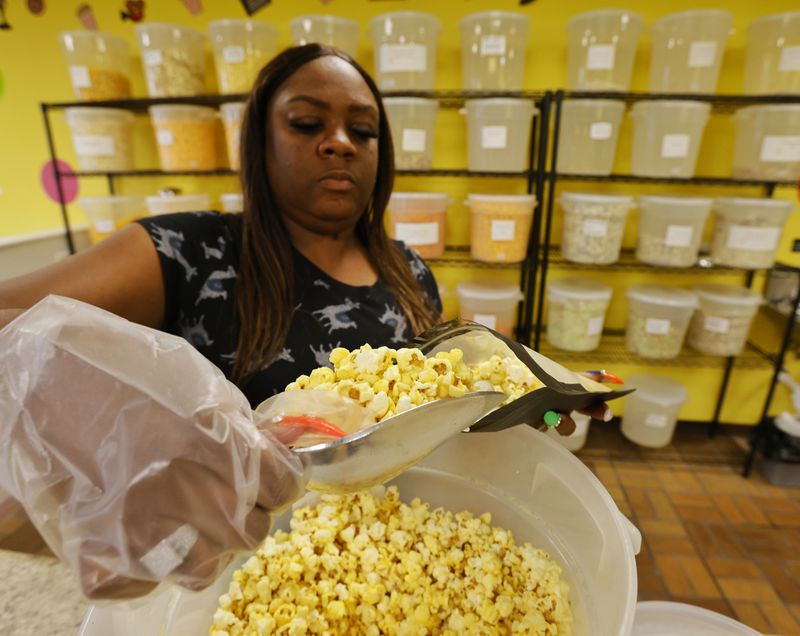 Marie Nelson scoops out popcorn for a customer at Nelson’s Popcorn Land Tuesday, Sept. 21, 2021 on Pleasant Avenue in Fairfield. They have over forty varieties of popcorn and pretzels available to try before you buy. NICK GRAHAM / STAFF

Christopher Nelson said he grew up in Chicago and was raised eating popcorn from Garrett Popcorn Shop, the Windy City’s equivalent to LaRosa’s in the Queen City.

“Everybody knows Garretts,” he said. “Everybody.”

The Nelsons will close the flea market booth next month and concentrate full-time on the Fairfield location, 5094 Pleasant Ave. His wife’s business, Marie’s Beauty Supply, is located a few doors down in the same shopping center.

Nelson’s Popcorn Land offers 45 diverse flavors and hopes to add 45 more before Christmas. He said the four most popular sellers are Chicago Mix (caramel and cheddar), Birthday Cake, Maple Bacon and Cinnamon Bun. He said customers are allowed to taste before they buy.

He offers six different size bags of popcorn that range from $3 to $40.

The Nelsons, who moved from Mason to Fairfield, are appreciative of the Butler County community in the last several weeks. He described business as “good” and getting better every day.

“If we have a good product,” he said, “they will support it.” Nelson’s Popcorn Land has opened on Pleasant Avenue in Fairfield with over forty varieties of popcorn and pretzels available to try before you buy. NICK GRAHAM / STAFF