NWA Fashion Week kicked off its first in-person runway shows in three years March 10 at the Momentary in Bentonville by featuring the Marshallese, Congolese, Latinx and transgender communities.

Interform CEO Robin Atkinson told the crowd the organization was proud to lift up the community and turn Northwest Arkansas into a region that has amazing fashion.

The fabrics for many of the shows were imported from Interform members’ families who are abroad, and the styles were a mix of traditional, modern and contemporary.

The crowd responded to the occasional playful moments from the catwalk and showed support for all the models. After a brief interlude when fire alarms caused a little evacuation at the Momentary, the excitement ramped up for one show in particular — the one featuring The Transition Closet. It put the spotlight on 13 models who are transgender, intersex or nonbinary.

Atkinson said Interform had collaborated on the show for months after coming to a realization last year that they wanted to think differently, more expansively, about working with the LGBTQ+ community, especially the transgender community.

Making a gender transition is an extremely daunting task, in part because, Atkinson said, a wardrobe reflects something about who you are. To replace everything, all of your clothing, is a monumental undertaking.

President of the board of Trans Equality Network Joel Manning, who is transgender and nonbinary, told audiences a lot of transgender people struggle with trying to “pass” for the gender that reflects who they are, but that a lot of people are against them in that effort. That’s how clothing can become a matter of survival.

Manning said he hopes for a future where you don’t have to go to a fashion show to see transgender people comfortable in their own skins.

On March 11, Bryce Arroyos made his debut as a fashion designer in Northwest Arkansas at NWA Fashion Week.

“I’m pretty nervous and a little tired, I’m not going to lie,” Arroyos said shortly before 10 of his looks graced the catwalk at The Momentary in Bentonville. “But honestly I’ve been waiting for it my entire life and didn’t realize it.”

Arroyos’ name may be familiar to some since he recently collaborated with his sister on an activation exhibit, “Waste Garden,” also at the Momentary. “Waste Garden” showed the work Arroyos puts in to creating garments. Since everything that Arroyos uses is repurposed, that process involves digging through bins of used items. Everything so far has been from Goodwill, he says. The activation was intended to aid others’ thinking about fashion by pointing to the impact that the fashion industry has on nature and the environment.

Arroyos took roughly three months to prepare for NWA Fashion Week and described his style as “hippie cowboy,” a sort of cross between western wear with hippie elements. His clothes are unisex looks, and he chose models of all genders. His philosophy is “if it fits, wear it.”

On average the pieces took three days or so to construct. When he makes trips to the Goodwill, Arroyos doesn’t look for anything in particular and instead gathers a variety of materials. Then he takes all of it home and thinks “What would go good with that?”

Leaders in retail beauty lines and fashion agree that while the industry has grown more racially diverse and inclusive in recent years, there’s still plenty of work to be done.

A panel discussion titled “L’Oreal: Representation in Beauty” took place at the Momentary March 12 as a part of NWA Fashion Week.

Angel Beasley, director of specialty hair for Walmart, who also leads diversity and inclusion for all of Walmart Beauty, moderated the discussion.

Beasley first asked panelists to discuss what it’s like to be a minority in the beauty and fashion worlds and what keeps them leaning in and continuing their craft.

Korto Momolu, a Liberian fashion designer who was on the fifth season of “Project Runway” and now resides in Little Rock, said she sometimes comes up against negative attitudes about her background as an immigrant. But she would like more people to understand that she sees Arkansas as her home and a place that she works hard for.

Kendall Dorsey, a celebrity hairstylist who worked backstage at NWA Fashion Week, said he’s definitely been in spaces where he felt different and was the only person of color in the room.

“At first, it felt like I had ‘made it,’ but then I had to find my way through this way of life,” Dorsey said. Now that he’s reached a certain level of acclaim, he hopes to stand up for others in a similar position, other Black creatives from small towns or rural parts of the country, in hopes that they can find platforms and places to cultivate their talent.

Each panelist faced their own challenges as they established themselves in the beauty business. Dorsey had to make peace with not “fitting in” everywhere.

Tenaj Ferguson, director of marketing for Loreal, specifically in multicultural beauty, said she felt defeated in past work when she would have an idea, bring it forward but then not be heard.

Ferguson said there’s a difference between inviting diverse voices to the table and actually asking them what they think, as well as acknowledging and empowering them.

Let’s “be stronger with our voices,” Momolu said. “When we go into those rooms, if there isn’t a table for us, let’s create our own out of scrap fabric. I’ve done it my own way. Artists, stand by what you believe in.” 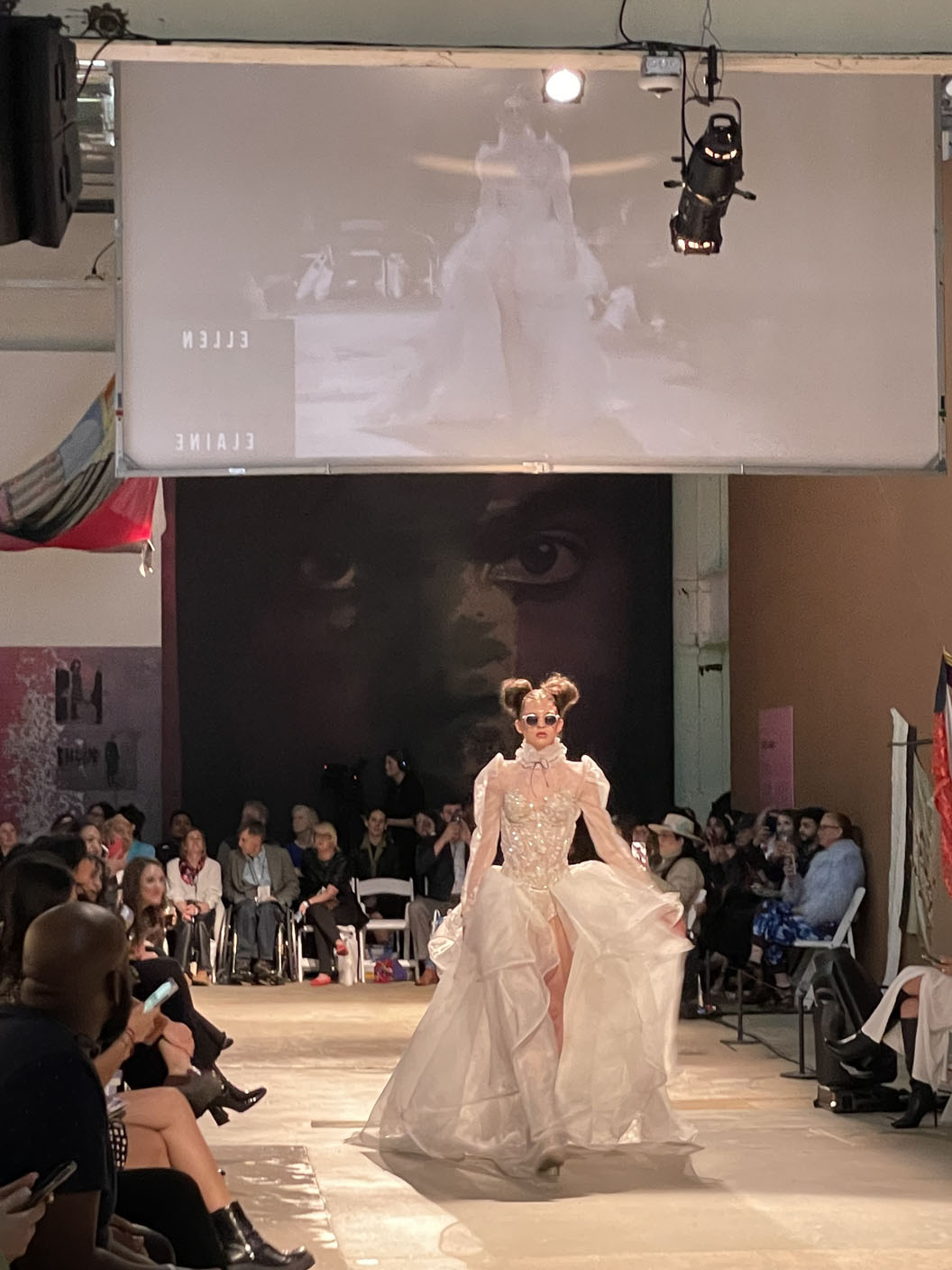 A model wears an item from the Ellen Elaine spring collection, created by Ashley Elaine Little, on March 10 during opening night of 2022 NWA Fashion Week at the Momentary in Bentonville. This particular collection was a collaboration with designers Morgan Oliver-Sherwood, Nicole Sizemore and Savannah Poulos. The inspiration for the collection was a romantic mix of colors and prints to create one-of-a-kind pieces, according to an NWA Fashion Week program. Check out nwaonline.com/2022FashionWeek/ to see more photos from the event. (NWA Democrat-Gazette/April Wallace)
Tags: barriers, breaks, Fashion, NWA, Week

Amazon Puts The Best Possible Spin On An Overbuilt Network